conjecture /kuhn-jek-cher/ n. : a guess about something based on how it seems and not on proof.

Generating explanations of the world is my favorite activity to do with friends. Sometimes the explanation points at an interesting idea—I've put a small subset of these here for your enjoyment, and will add more over time. If you have evidence for / against, don't hesitate to tell me!

I was feeling dissatisfied with existing definitions of agency and self-efficacy in the psychology literature (from Albert Bandura), so I tried, as a joke, to make a mathematical model of these two ideas. This model has more truth to it than I expected! 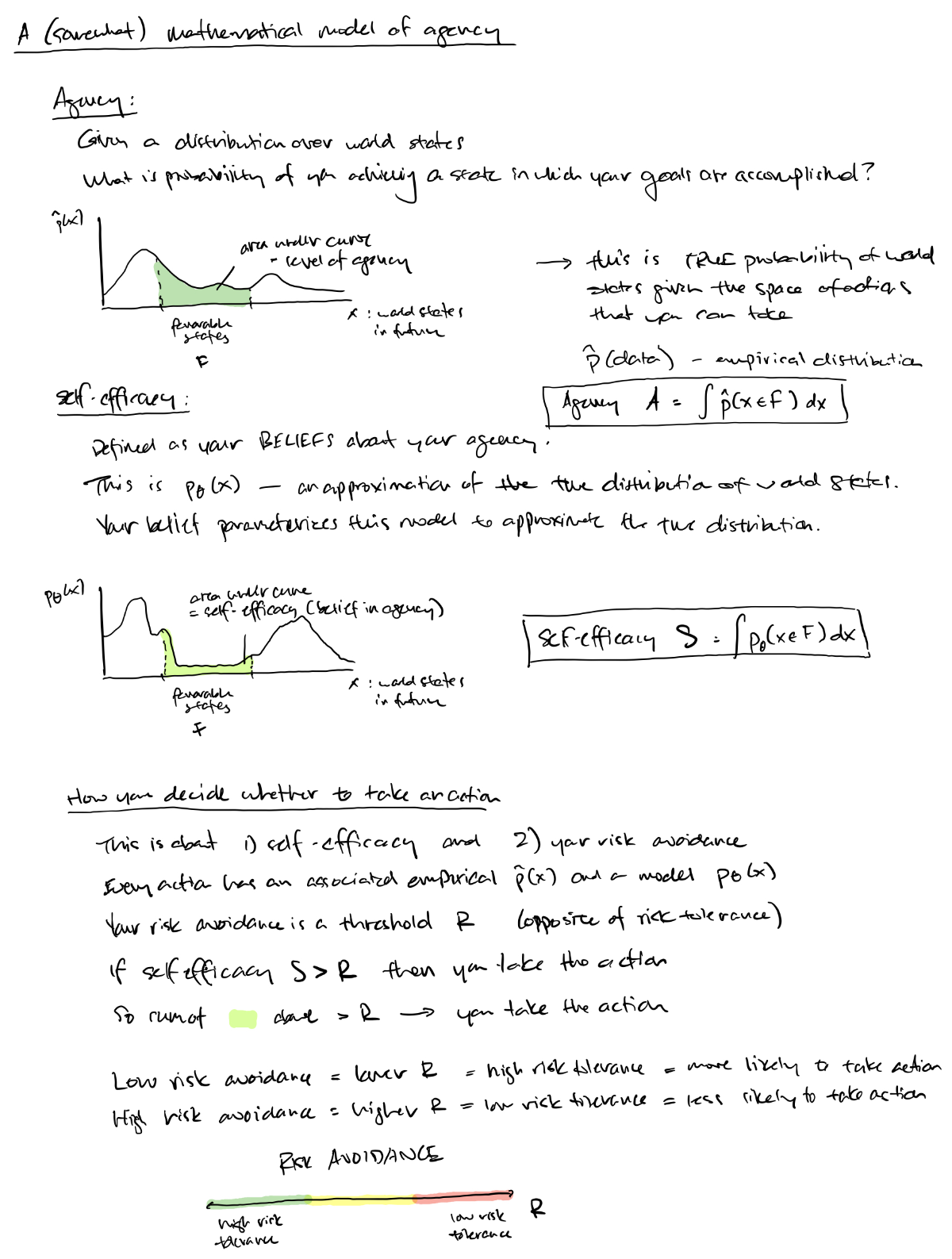 Humans are fundamentally creative and contribution-oriented when our basic needs are met and we're freed from fear & scarcity. These two processes must be done separately—meeting our basic needs does not usually remove our internal sense of fear or scarcity.

Many of today's problems exist because humanity as a species is still very nascent. We've only been writing for a few millennia, only been doing science for a few centuries, only been a global society for a few decades. Of course we don't yet have good solutions for governance, coordination, wealth distribution, economic stability, justice, mental health, etc. We should expect to be having problems all the time, and we should expect to have to solve them.

Beliefs / stories / narratives are our way of representing and communicating predictions for non-visual information. A belief describes the output distribution of our predictive model of a situation.

Our predictions also change how we interpret our sensory inputs (see Anil Seth's TED talk). If narratives are predictions, and predictions change what we are able to see, then we should be very careful what narratives we adopt because certain ones will blind us.

This applies not only at an individual level, but also at a cultural level. Many of our cultural narratives are dangerously limiting because they are poor explanations: about the creative process, about how we learn, about how children should be treated, about what will make us happy.

Technologists often ignore or deride social movements, but in fact technological and social change are critical to each other.

Technology enables social change (though it's certainly not the only enabler). Feminism/suffrage likely wouldn’t have succeeded without the industrial revolution, LGBTQ rights without understanding genetics, etc.

And social context affects what technologies get developed. Would the personal computer / development of UI have happened without 1960s counterculture? Likely not.

Trauma and protective voices in our minds result from model overfitting. Children learn with less data by overfitting more readily. This is perhaps why trauma is often traced back to childhood events. In many therapy methods, showing the voice our current life situation causes it to update its strategy - we're giving it more training inputs to help it generalize.

Things that are predicable, but for which we don't have a good explanation, provide trailheads for research. Humans are one such example: much of our behavior is predictable, both as individuals and in groups. But in most cases, we don't yet have very satisfying explanations for why.

[Credit to Laura Deming for the conversation that generated this, and to Hongyi Li, for pointing out that my original formulation violated Gödel's incompleteness theorem.]

Credit to Josh Albrecht for coming up with "Kanjectures".